John Richard Rice was born in Cooke County, Texas, on December 11, 1895, the son of William H. and Sallie Elizabeth La Prade Rice. Educated at Decatur Baptist College and Baylor University, he did graduate work at the Southwestern Baptist Theological Seminary and the University of Chicago.

He married Lloys McClure Cooke, whom he had met at Decatur, and shortly thereafter he entered Southwestern Baptist Theological Smeinary. Six daughters were born of that union
Rice was a remarkably hard worker who rarely took a vacation. He wrote texts and picked out melodic lines for dozens of simple gospel songs, mostly about revival and soulwinning. He was extremely frugal, there was never a hint of scandal about his personal life, and the testimonies of his six daughters were a credit to his ministry.

He authored more than 200 books and booklets circulating in excess of 60 million copies before his death, about a dozen of which were translated into at least 35 foreign languages. Dr. Rice started the Voice of Revival, a 30-minute radio broadcast heard on 69 stations in 29 states, Puerto Rico and the Philippine Islands. He died in Murfreesboro, Tennessee on December 29, 1980. 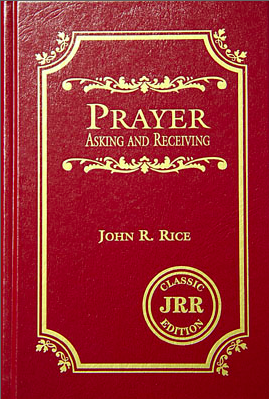 Prayer, Asking and Receiving by John R. Rice is absolutely a wonderful book. It would definitely be good if you could get yourself a copy to read during your free time. This is a book of Bible teaching on prayer. This was written to help readers better understand the power of prayer and to establish a long lasting relationship with the Lord. It focused on the simple basis that there is a God who has revealed His will in the Bible, an infallible Book.  The Bible teaches that God delights to answer prayer.  The Bible gives us many great and exceedingly precious promises about what God will do for those who come to Him in prayer. This books allows the reader to be encouraged to renew their passion and practice of prayer. God said, “Ask, and it shall be given to you” (Matthew 7:7), and again, “Ask, and you shall receive” (John 16:24).  So prayer is asking, and an answer to prayer is receiving.

Grab a copy of Prayer, Asking and Receiving